Australia's most frequent flyers can rack up as many miles and status credits as they like but that won't get them through the door at The Chairman's Lounge, Qantas' super-elite airport lounge.

This invitation-only lounge “is probably the most exclusive club in the country” Qantas CEO Alan Joyce once told Australian Business Traveller, while wearing the smile of a man with a sly secret.

That exclusivity alone makes The Chairman’s Lounge a subject of ardent curiosity, further fuelled by the scarcity of hard information on this haven for the very well-heeled.

The first rule of The Chairman's Lounge...

The Chairman’s Lounge is aptly named: the Chairman of Qantas, Leigh Clifford, personally signs off on each membership application, which lasts for two years.

“We manage the membership on his behalf, but it's not an easy group to get into” Tully tells Australian Business Traveller. And it’s got nothing to do with your frequent flyer miles or status credits.

“Our Qantas Frequent Flyer Platinum One tier is about hard-core flying loyal Qantas customers. It's a very different group to The Chairman’s Lounge, which tends to be decision-makers, CEOs and celebrities.”

This select group includes politicians and high court judges, along with the chair and CEO of  major corporate accounts – the top end of town which spend heavily on Qantas flights.

“Membership is very sought after and it's a great asset for Qantas to utilise for our commercial endeavours” Alan Joyce says.

Beyond those frosted glass doors

As to the lounges themselves, there aren’t even any signs in the airport to point the way: if you’re a member, you’ll know where it is.

(For those wondering, look near the exiting Qantas lounges for a frosted glass door marked ‘Private’, and often discretely tucked away.)

Designed by Marc Newson, the Chairman's Lounge shares much of its DNA with the highly-regarded Qantas International First Lounge.

That not only includes the overall design and furnishings...

... there are also meeting rooms where the high and mighty can conduct their business in private...

... and a library for those quieter, more reflective moments.

The buffet includes Rockpool-influenced food, while the  drinks bar is both self-serve and always open – no drumming of the fingers until 11am!.

Beyond that, The Chairman’s Lounge is more like a smaller and more exclusive version of the best which Qantas already offers its Platinum members.

It’s less about extra features than highly personalised service and benefits such as a higher chance of upgrades and (unconfirmed) complimentary Chairman’s Lounge membership for your partner.

One thing’s for sure: The Chairman’s Lounge isn’t as much about waiting for your flight as privacy, recognition and potentially networking.

Which is why not even the million miles of Up In The Air's Ryan Bingham will get you past that invitation-only ‘Private’ door.

Pre-flight bliss at the spa in Qantas' First Class Lounge

Behind the scenes: fine dining at the Qantas First Lounge

The Qantas First Lounge: how seasonal menus are crafted

Keep up to date with the latest news for business travellers and frequent flyers: follow @AusBT on Twitter.

David Flynn is the Editor-in-Chief of Executive Traveller and a bit of a travel tragic with a weakness for good coffee, shopping and lychee martinis.

... and over that he forgets the Premium core customers... all Platinum members ...

please let them know your dissatisfaction about the cancelation of the anytime access for Platinum members ... there really is very little difference between Gold and Platinum now, and definately not worth the extra money to pay.

... Not forgetting that those CEO and Chairman types will probably be riding in the Gulfstream, rather than on a commercial service with the mere managers who work for them.

If you go to the Platinum priviliges section of the QFF website ans scroll through the pics to the one that says "A range of priority services..." you can get a glimpse inside the Canberra Lounge...

It is restricted to 7000 members, according to this presentation Alan Joyce delivered at JP Morgan's Aviation Corporate Access Day late last year.

Yeah thats the crazy bit. But Tully wont be drawn on how many Chairman’s Lounge members are on the books, saying “that’s not information we share.”

What you dont know, you say is private or you make it up.

I have been in the Brisbane CL several times and the Sydney CL once. The CL is comfy and small. The staff come and get you when it is your time to board. The food is similar to the business lounges, however there extra hot food options. The wine selection, beer and spirits are also an improvement on the business lounges, and the self serve bar has been open when I was there once at 8am. Generally in Brisbane there have been no more than 5 other people in the lounge when I have been in there (including Kylie Minogue once). The staff are also excellent and can answer nearly every question with a 'yes'.

Thanks for the first-hand feedback, QldTraveller - nice to hear from the inside!

I've got the invite and I am not what below describes! Ironic, eh?

Wow,,,For the very best customers Qantas will give those FF some notice as to whether they have been awarded an upgrade. Even by SMS.....Well how out of touch are they? Emirates provide instant upgrade upon booking as a low end FF and whether you are flying doscpunt economy or anything else. Cant be too hard for Qantas except they just dont want to do it....

Hi Keith – note that this article is from middle of the year, Qantas has since announced SMS upgrade notifications – see https://www.executivetraveller.com/qantas-locks-in-business-class-upgrades-sooner-with-sms-alerts.

Yes noted, but the overall point being that Qantas dont give upgrade notification until the last 48 hours. Useless really, with almost every other FF program its when you book.

Wow.  Is this correct Keith????  I'm platinum and am looking for another one world carrier to swap to that will SPECIFICALLY honour an international points upgrade to Business Class at the point of booking.  This drivs me nuts with qantas.  If my wife and I are heading over to UK for a big trip, there's no way I'm going to sit biting my nails a week or so before the departure wondering if I've been 'honoured' enough to be 'awarded' an upgrade that I'm using hundreds of thousands of earned points to pay for. If Emirates do this and I can earn domestically with them flying qantas, I'm heading over.

Can you confirm I have this right and thanks for tip Keith.

I think its time Qantas took a look at who is flying and what effect a CEO can have on who their staff fly with. Domestic business can be split 50/50 however international can be switched 100% to other carriers. I know that I switched 50% of my staff to other carriers when I was given the wrong answers by Qantas. When you spend 200 days a year traveling the over crowded lounges become an issue.

Found a picture of the welcome pack at this link: https://www.dia.org.au/images/news/shadowbox/1202_2.jpg

Oh, nice find - we'll add that image to this article!

This picture here is said to be taken in the Qantas Chairmans Lounge. Does it look like the Chairmans lounge? or is it the First Lounge? First lounge seats are red not green... am i wrong? 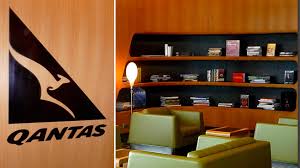 It came from here.

Yes, that'd be the Chariman's Lounge - in Sydney International First Lounge the chairs are a dusky red...

I have been to the CL several times -- as a guest! -- and it used to be really terrific: Riedel glassware, magnificent wines, good food selection.

In my last few visits this year however, I noticed it has gone off -- little more than the J-class lounge--absent the high-vis vests ;-)

Certainly the Riedel is gone and the hot food resembled something that you might expect from an RSL's Chinese counter. At least though, unlike the J-lounge, there was food to be had rather than a dish of a few picked-over vegetables suspended in a sea of hour-old sauce.

Wow! Where did these photos come from?!

Looks very similar to the images we saw last week for the new HKG lounge - I can certainly see where the inspiration came from. Much more 'gentleman's club' in style when compared to the F lounges, now i just need to become an MP or something...

Exactly am. CL is much better though

So it's really just a hideout for celebrities , politicians, blue chip CEOs and billionaires who fly on a private jet anyway? Do other airlines have the same deal?

which CL is this?

Does anyone know the view Sydney CL guests can enjoy?

Judging by the position of the Sydney Chairman's Lounge, which faces the opposite way to the Qantas Business Lounge, I believe their view would be overlooking the main hall of the Qantas T3 terminal, in other words, looking down on everybody else. How appropriate!

If you are a CL, access is a bonus, but for others I wouldn't feel too disappointed. It's just a fancier Qantas Pub, with the only real benefit that you'll always find a seat - everything else can be had better elsewhere (and you don't have to spend a dollar with Qantas to get it). People can get a little carried away with the whole "status" thing.

@gippsflyer Totally agree. I have a friend who was excited about going through the CL at CBR with his boss and I remember saying, 'when push turns to shove, it's a room with some nice furniture in it'.

My neighbour also went Qantas First once and I told her $13,000 is a lot of money for what will never be more then a 20 hour experience. Aparently they have a Rockpool ninspired menu in the lounge. 'You know you can go to the actualy Rockpool in Crown and spend a lot less then $13k,' I said.

@Jono That's how I got through those frosted doors, on the coat-tails of my 'VIP' boss too lol. After a couple of such visits, I think reality sunk it, and then I wondered why people get so worked up about it.

Its the sizzle rather than the steak that makes people hype it up I think.

@gippsflyer Yep, it's like when a choco-holic gets a job at Lindt or Max Brenner. The first three days is spent going crazy and eating as much as you can and by Day 4 you are totally sick of the smell :)

That being said, if they're offering CL memberships or First Class for next to nothing, I would say no :)

Hi Guest, join in the discussion on Photos: Inside the Qantas Chairman's Lounge